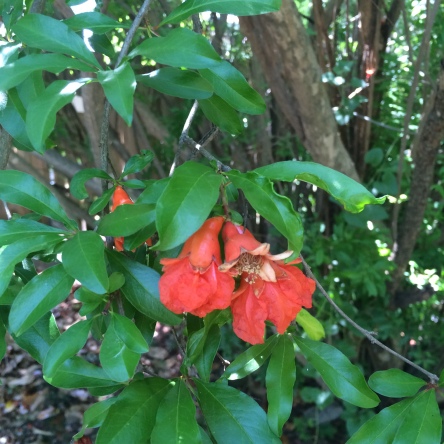 For the last 6 and possibly more years (I don’t know when it started happening), I have noticed that the pomegranate trees in my city are no longer producing fruit. I live in a the rapidly growing city of Austin, Texas. I have been raising my children in a lovely downtown neighborhood cottage since they were born. Pomegranate trees are everywhere here, and they usually grow well in this environment. At least thats what I remember.

But lately I have noticed some interesting trends in the seasonal and environmental patterns. One being that the pomegranate tree haven’t bore fruit in years. There are thousands of pomegranate trees in my city, including one in my front yard. Not a single one that I have seen has born fruit in years. And this is just since I noticed. It may have been happening for a much longer time.

The pomegranate tree produces big orange-red flowers in the spring time. And sometimes even a couple large green bulbs. But the bulbs never matured to become ripe red fruit. This is literally the case with every single tree I’ve seen in the city. 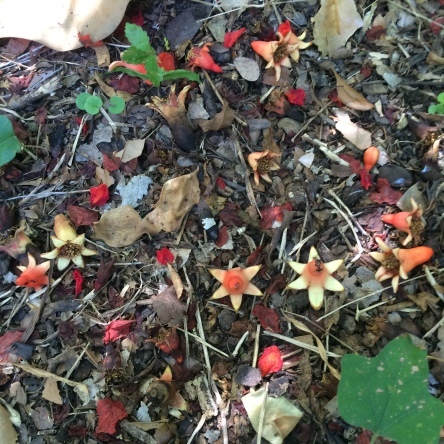 (Fruitless pomegranate blooms on the ground)

This trend now appears to be happening with a different fruit tree. But I hope to God I am wrong. This year, for the first time in many years… the loquat trees did not produce fruit either. They usually produce so much fruit that they fall all over the ground, all over the entire city. Even my neighbor has to clean them all up. But I always ate them. My kids liked them too. But this year, I only saw one loquat tree that bore fruit. None of the ones in my yard, and we have at least 3. But also the cluster of loquat trees down the street, also didn’t produce fruit… save for a single lone tree. That tree was like “the last man standing.” I wonder why only one produced fruit? I fear the trend will continue, like the trend of the pomegranate trees.

This isn’t just the trees in my neighborhood. It is every fruit tree in the city. What is happening?

Is anybody else recognizing this pattern? What do you think it means? And how do you feel about it?

I realized this is not the first time I’ve seen a trend like this here before. When I was much younger, I visited Austin a couple times with my parents. I remember there used to be large swarms of bees. I would find them everywhere. Especially at Barton Springs and Zilker Park. The bees would swarm around trash cans. Every time I had to throw trash away, I would encounter the swarms of bees. They seemed very excited and even slightly agitated. The intensity was in their numbers, and the energy of their buzzing around the trash.

I would see more calm and peaceful bees on bushes, and on flowers. They would flow separately in small groups, remain connected to one another, yet each working independently.

I no longer see the bees. Not in the trash, nor in the fields and flowers. I haven’t seen swarms of bees here in well over a decade. Occasionally, I will find a lone bee; never a family and never a group. Just one completely alone bee. And always it looks to be severely distressed. After writhing around and twitching, it inevitably dies. Living the city, this is the way I see bees now.

I am told of a warning. Which many claim is a quote from Einstein. The quote claims something about the disappearance of the bees, would have serious consequences. You probably know which quote I’m talking about. I wont make any assumptions, but I am aware of the impact that the disappearance of vital pollinators could have on the environment.

I know that there are still an abundance of wild bees. And there are bee sanctuaries all over the world. And hey, I even know many people who safely house bee hives on their land or in their yard. But the city pollinators for the most part are gone. And the city fruit trees seem to be collectively going barren. And nobody seems to care. They all buy their food from the grocery store or eat out at fast food restaurants.

But I loved to walk around the neighborhood every year, picking fruit trees. There were many in my neighborhood. We lived next to a fig tree which was eventually cut down. During spring loquats would drop everywhere. Grapefruits and citrus trees would drop fruit in the winter time. Persimmons trees in the fall. In the summer, peaches and plums… but the ones in the city are depressingly few and far between. Nevertheless, the small amount of natural fruit growth even in the middle of the city was comforting to me. And their disappearance, I find rather disturbing.

I’m sure these trends of the disappearance of fruit life and wildlife are all related. And I’m sure there are many environmental factors that are contributing. Just the other day, I heard an ad online that was promoting the herbicide Round-up, which many believe are partly responsible for CCD, colony collapse disorder. When you live in the city, its obvious that there are legal, political, agricultural and moral ideology that hold certain systems in place, and keeping out all the natural systems of nature.

It is both sad and infuriating. I often dream of escaping into the country. And ultimately, that is what I will end up doing. I even know of farms and land that are still untouched by modernization for the most part. They are like slices of heaven for me. And I often feel safe and at home out in the natural world. The country wild life and the city are becoming increasingly polarized. And an even more alarming trend, is that even the countryside is becoming modernized. Edible trees are being grown less and less. And the ones that do exist are dying out or no longer bearing fruit. I understand that the regulations and attitudes of the city are not designed to protect wildlife. Even a hostile attitude is taken towards weeds. Weeds, which in my opinion, are the best medicines.

But there is yet another trend still. The seasons appear to be starting later and later every year. This may be a part of a natural cycle that occurs with the shifting of the planet on its axis. Yet, there is an even larger cycle that comes with the shifting of the poles. Could the seasons actually be changing? Maybe we are being called the ride the winds of change. We are being called to shift our crops and adapt to a new climate. Or promote the protection of certain endangered species. Even the Monarch Butterfly migration which comes through this area is in need of protection.

There is also a ray of light. In Austin, the city in which I live, we have decided to break the cycle of the fear of wildlife with our city bats. In the 1980’s, hundreds of thousands of bats moved under the congress street bridge. At first the people were fearful and disgusted. They even petitioned to have the bats irradiated. But then scientists came to Austin to explain that bats are peaceful and intelligent creatures, which eat all the mosquitoes when they fly out at night. As long as you don’t mess with them, they wont bother you. Quickly the city’s attitude towards the bats changed, and now they protect the bats, and promote awareness. The bats act as a balancer. This is the kind of harmony that is possible when we understand the way nature works, and why we need it.

I wish this change of heart could be seen with other wildlife species. I wish attitudes towards nature were more accepting and allowing. I dream of a world, in which the cities and the country wildlife are not separate. I want to see a world where weeds are not sprayed with toxins, and where public fruit trees are planted without fear. Where legal and political regulation took a more protective stance on wildlife, like they did for the bats. Where free food and herbs can grow abundantly around the cities.

I see farmers out in the country, taking to heroic grassroots efforts to keep the wildlife alive. I see them honorably bringing these treasures of the earth into the cities, for even the modern person to enjoy. So the taste of the land is still fresh in people’s minds. I see the country side becoming powerful enough to even form their own rapidly growing cities, with protective regulations, and promoting ideology of the natural world. Even acting as a education academy for living in harmony with nature.

I realize that there are many benefits to coexisting peacefully with the natural world. You become more connected with the environment around you. You realize that the earth can and will provide for you, provided that you treat it right. Its even an opportunity to live in accordance with natural law. It connects you to higher power. Because coexisting harmoniously with the natural world, actually teaches us higher concepts such as peaceful coexistence, cooperation, allowing, permaculture, manifestation and even abundance and freedom.

(Me under my barren pomegranate tree)